Signing Appearances, and Another Camping Attempt

With the first day of Summer 2018 come and gone a few days ago, I'm beginning to look ahead to what should be a busy summer for me. Not just because of my day job, but also due to a fully packed slate of writing and promoting.

On the writing side, in just over a week, the July 2018 session of Camp NaNoWriMo is about to commence. Lately, my NaNoWriMo and Camp NaNoWriMo attempts have fallen well short of my intended targets, chalking up the blame to my work schedule and lack of concentration due to my two dogs (who I love dearly) barking at the neighbors in the apartment complex my wife and I reside within. However, I've decided to put my foot down, and commit (or, at least, attempt to commit) to writing 15,000 words for the upcoming month. That averages out to roughly 500 words a day, every day, for the 31-day span. With the 4th of July falling in the middle of the first week this year, I intend to make some serious in-roads on a new project I'm planning on starting: the second official book of my Phil Bennett spin-off series of cozy mysteries.

The intended title, The Fluffy Felony, features Phil, Maggie, and Biscuit, attending a reunion at a dog rescue resort in Portage la Prairie, Manitoba, the resort where Maggie had originally received Biscuit from. Since it's a cozy mystery, I'm planning on having dognappings occur as the crime being committed. I'm also trying to determine if I should give the dogs a human voice when conversing with one another. I know that sounds a little corny, but it should help make the story more interesting.

Now, I know you're wondering, "But Doug, what do you know about dog rescues?" This is where it gets interesting. For years, my wife has volunteered with an actual dog rescue resort in Iowa, named "Fluffybutts Rescue Resort." The dog rescue will be the basis for the one I'll be writing about in TFF. In fact, I had the pleasure of attending a similar reunion back in the summer of 2016, so the book will be loosely based on that reunion. It's bound to be an exciting project, and one I can't wait to start writing.

That being said, there will be a couple days in the middle of July where writing will have to take a backseat, as I will be appearing at the 2nd Tampa Indie Author Book Convention on July 14th and 15th. This will be the first of three signing appearances I'll be doing this year. The others will be Readers & Writers - Tampa 2018 taking place on August 25th, a mere two weeks before I fly out to Kansas City, Missouri to take part in my last signing of 2018, Show Me Your Books on September 7th and 8th.

At all three events, I will be signing copies of all thirteen titles I have published under my three author personas. However, Show Me Your Books will have a special bonus: the official release of my fourteenth title, a novella from my Phil Bennett line, entitled Wickedness in Wichita. 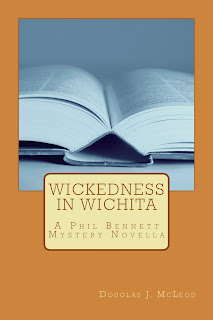 This novella features Phil, along with his two spectral guises, Amber and Karen (Yes, Karen Prairie from my Gary Celdom series makes another appearance in the Phil storyline.), attending his first ever author signing event in Wichita, Kansas. While there, shenanigans befall the protagonist. It's a fish out of water tale, but with a message of acceptance in the end.

The electronic version of the book is available for pre-order now on Amazon Kindle, Kobo, Nook, and Apple Books in advance of its' release on Friday, September 7th, at the Show Me Your Books event in Kansas City, MO (which is what WiW is loosely based upon.)

That's all for now, as my wife and dogs will be up soon, and I have to get ready for my usual Saturday morning routine. Readers, if you're going to be in Tampa in 3 weeks, or late August, or in Kansas City in early September, I hope to see you there. Until next time, may the books you read be entertaining, and the formatting be bearable.

Posted by Douglas J. McLeod at 8:07 AM No comments: