'Twas the Eve of #OctPoWriMo

I have admitted in the past that I was a 'seasonal writer,' a person who only writes a lot during certain periods of the year. I'm not sure if this is because I like to push the limits of creativity, but the more I think about it, my muse tends to only come out of its' shell during the months of November, April, and July: the months that consist of National Novel Writing Month (NaNoWriMo), and its' more flexible cousin, Camp NaNoWriMo. I did explore February Album Writing Month (FAWM) once, but I did not meet the intended goal for the month, my muse regressing to the traditional three months affiliated with the official writing challenges put on by The Office of Letters and Light. However, I'm once again, embarking on a writing challenge that will test my muse's comfort level outside of its' norm.

Tomorrow marks the first of October, and with it, the commencement of the 2017 edition of October Poetry Writing Month (OctPoWriMo). The objective of this particular challenge is to compose 31 poems within the 31 days of the calendar's most famous autumnal month. As someone who has written poetry before under a set of self-imposed parameters, the opportunity to partake in such a writing objective is something I eagerly anticipate. Especially when these parameters are less-imposing than the ones I had set for myself in the past. (For reference purposes, I penned my C. D. Melley persona's Stanzas from the Sunshine in 5 weeks, writing 4 poems a day on average.)

However, unlike my poetry collections of the past, where real-life (read: a 40-hour work week) was not present, I am being mindful of such a time restriction this time around. Having said that, I will do my best to write the best reflective poetry (the style my poems usually emulates) I can over the course of the next 31 days. As such, my blog page will be updating daily over the next month with these creative outlets. Considering how stressful my day job can be some days, this could make for some interesting verses to appear. I just hope I can calm down from any of stress triggers before I allow my muse to take over for the day.

So stay tuned, Day 1's poem will be cropping up tomorrow, and I hope y'all will enjoy my muse's prose over the next 31 days.

Surviving The Beast Known as Irma

I will be the first to admit I haven't experienced a lot of natural disasters in my life. Yes, I've endured the ice storm that befell Southern Ontario in December 2013, and that was quite an adventure unto itself, but nothing as compared to what I have experienced over the past week.

Unless you've been living under a rock, you've probably heard the news about Hurricane Irma: a storm which achieved monstrous Category 5 status when it first hit the outer Caribbean island of Barbuda last week. The storm brewed a few days after Hurricane Harvey, a Category 4 cyclone, laid waste to Southern Texas, leaving the streets of Houston flooded for days, and Irma had her sights set on the Florida peninsula: the area where I currently reside.

As Irma churned through the northern Caribbean Sea, people in my neck of the woods feared the absolute worst. My workplace closed on Thursday to help people prepare, and if necessary, evacuate, in advance of Irma's arrival. The only problem was, no one truly knew where in Florida it would make its' initial landfall. Some early models had forecast the storm to hit Miami, and the southeastern part of the state. However, it was not a true guarantee it would strike there first. Irma continued to churn west along the barrier islands on the northern coast of Cuba, weakening the storm a bit to a Category 4. But Florida was still in Irma's cross hairs. Instead of going up the Atlantic coast, as initially expected, it made a beeline for the Gulf coast, and in turn, the part of the state where I live.

Irma made first American landfall in the Florida Keys at 9:10 this past Sunday morning, and continued to bore a path up Florida's west coast. My wife and I made all the necessary preparations in the days before, and feared the worst. Shelters were at the ready to accept people in the area, and it was something we had contemplated. Alas, not many accepted pets, and we did not want to abandon our two fur kids. Instead the four of us decided to hunker down, and tough the beast out. The worst of Irma's fury began to strike my neighborhood just after 11:00 Sunday night. Rain pelted the pavement of our apartment complex, and hurricane force winds rattled the windows. Our electricity went out at approximately a half-hour later, and would not return until a good twelve hours later.

The next morning, after the curfew had been lifted for our community, I took a short stroll to survey the damage. Some of the neighboring trees had broken branches and the storm sewer grates we're littered with debris; however, for the most part, our area had gotten off relatively easy compared to some areas to the south. There were reports of broken streetlights and flooding in other communities. Businesses were closed up, so the struggle to find a hot meal or gas was a challenge. But the clean-up has begun, and things have started to return to normal.

At the time of writing this, it's almost thirty-six hours since Irma's apex struck my neighborhood. While I'm thankful for all of the well wishes and requests to "stay safe" during her fury, the storm has definitely changed me. A friend jovially told me, "You'll never forget your first." in the days leading up to Irma's impact. While I will begrudgingly agree with her, it's not something I would wish upon anyone. But I'm pleased to say that I've survived my first ever hurricane without no physical damages, the psychological effect will last me for a while.

Then again, any natural disaster would have that effect on anyone.
Posted by Douglas J. McLeod at 10:41 AM No comments:

With it being the first Monday in September, I'm enjoying the day off from work, as the majority of those within my former home of Canada, and my current home of the U.S., celebrate the Labo(u)r Day holiday, and the unofficial end of summer. In some of the recent years' past, I would spend the day at the corner of Cannon and Balsam in Hamilton, watching the annual 'Labour Day Classic' between the hometown Tiger-Cats, and their arch-rivals from up the Queen Elizabeth Way. Toronto Argonauts. Unfortunately, my Cats have returned to the form of their 2000's to the point where they are win-less halfway through the season. Needless to say, I'm not impressed with some of their front-office decisions lately, either, so I'm willing to write this season off as an epic fail.

Canadian football aside, I've been rather occupied as of late with my day job. I'm in the last few weeks of a temporary increase in hours from my previous part-time status to full-time. To say the job has been sapping my creative energy would be an understatement. Yet, I am looking at the upcoming autumn months with anticipation. I intend to make another attempt at National Novel Writing Month (NaNoWriMo) in November, and as a creative warm-up, I have signed up for a new challenge to me: October Poetry Writing Month (OctPoWriMo). While NaNo focuses on writing a 50,000-word novel within the 30 days of November, OctPo challenges aspiring poets to pen a poem a day, every day, for the 31 days of October. In doing so, I have linked my blog to the challenge, so this October, my blog will be filled with daily postings of my poetic attempts. While I'm no stranger to prose (four poetry collections under my C. D. Melley persona to show for it), this will be a slightly new avenue to me. So, I hope those followers to my blog will enjoy my postings in a mere *checks calender* 27 days' time.

On the Book Front, I have put the long-awaited second book in my Prairie Fire Trilogy, The Prairie Fire Rekindled, up for pre-order on Kindle, Kobo, Nook, and iBooks. The book will officially release on Saturday, November 4, 2017, so about a week or so before, I will hit the publish button for the paperback version, which means the paperback version will pop up on Amazon a few days before, depending on how quick Amazon builds the listing pages. Until then, you can pre-order the e-Book versions for the aforementioned devices and apps at the links below: 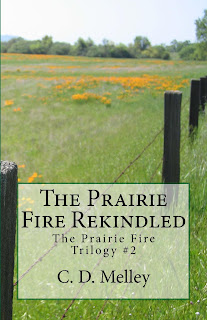 Finally, two of my detective/mystery books have been nominated for the 2017 Summer Indie Book Awards by Metamorph Publishing. Voting is ongoing until midnight, North American Central Time on Monday, September 11th, and you can vote once per day, per category. So, if you'd like to support this independent author, here are the links of where to vote for the books in question: 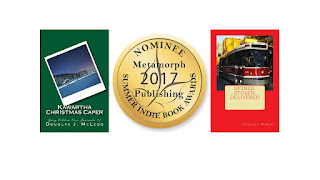 That's all from me now. I hope everyone has enjoyed a happy and safe Labo(u)r Day weekend, and like me, are dreading the return to work on Tuesday.

Until next time,
Douglas
Posted by Douglas J. McLeod at 7:26 PM No comments: