A quick look at the calendar shows that Spring is in the air. I know my readers in northern climes have experienced a harsh, cold winter (and, at times, it's been downright chilly in Florida, too), so the warmer weather is a welcome sight. The Major League Baseball season starts this weekend, and I'm hoping the Blue Jays have another stellar season; hoping to improve on their losses in the American League Championship Series the past couple of seasons. But, for the writer in me, it's nearing time for the first of two sessions of Camp NaNoWriMo.

For those familiar with the traditional concept of National Novel Writing Month in November, the "Camp" sessions offer more flexibility; allowing participants to set their own word count instead of the rigid 50,000 words in 30 days. Also, the Camp sessions allow participants to work on any type of writing their heart desires instead of a traditional novel. If there is a script you want to write, you can do that. Poetry? Perfectly fine. Heck, I confess Before I Leave Canada started as a Camp NaNo project. Wherever your muse takes you is fine in either April or July.

My project for April is a little something personal I intend to write. I don't want to give too many details, as I've been known to jinx myself when I announce specifics about a project early. All I will say is I will attempt to write 25,000 words in April. I also have a separate project in the works for the July session, where the goal for that will be between 15,000 and 20,000 words.  If Camp NaNo is something up your alley, there is still time to sign up (for FREE) for the April session over at: www.campnanowrimo.org

Also, I have been a little busy the past while with a different project that I've recently released. While I failed in my attempt to write 50,000 words last November, I was able to cobble together almost 37,000 in the end to formulate the first book in what will be a spin-off series from my Gary Celdom books, featuring his best friend and writer, Phil Bennett. Phil's first "solo" adventure, entitled Signed, Stolen, Delivered continues the exploits of Phil and Maggie post-Kawartha Christmas Caper, and takes a look at Phil's attempt to find a part-time job to help supplement his government-assistance income since his book sales are slow to take off. He ends up getting a job as a transit courier where he meets an interesting cast of characters. Things appear to be going smoothly until he finds out there is a string of petty thefts within the company. It is up to Phil to help find out who's behind the crimes, all the while managing a long-distance relationship, and his bossy roommate. However, Phil is not alone, as we get a more in-depth look at the spirit from Phil's past that continues to haunt him: one of his ex-girlfriends, Amber. 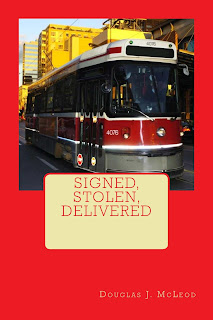 The book is available on Amazon as a paperback, or for your Kindle. Like all of my other titles, the book is enrolled in the Kindle Unlimited program (sorry, folks with Kobo and Nooks). And, can be found right here.

Until next time, happy reading.