In advance of the release of the fourth Gary Celdom adventure this November, here's a snippet from the upcoming tale of Gary and the gang, as we take a look at when Gary's best friend, Phil Bennett, first lays eyes on the ghostly apparition that is Gary's former fiancee, Karen Prairie.


After washing his hands, Phil splashed some water upon his face. He was taken aback from what had happened. While he thought Maggie was a nice woman, for her to brazenly smooch him upon his lips was something he was not expecting.

"What the hell is going on with Maggie?" he asked himself.

A female voice answered him from behind the shower curtain. "Isn't it obvious, Phil?" it said. "She's got it bad for you."

The writer has a perplexed look on his face. He stared into the mirror, and didn't see anyone standing behind him. But, he heard the voice coming from beside him. He cautiously turned towards the shower, and pulled the curtain aside. Standing before him, in the stall, was the ghostly figure of Karen Prairie.

"Ugh," the specter bemoaned. "I've got to stop revealing myself in washrooms. They're the most uncomfortable places to be in."

"For yourself, or the person who is seeing you? Because right now, I'm about to drop one in my shorts."

"Please don't, Phil. I might be dead, but there's no need to be scared shitless of me."

The writer peered closer at my former fiancée. "Karen, is that you?"

Karen smirked. "Why, are there any other ghosts you see aside from me in Gary's shower? Could you be a dear, and help me out?"

Phil held the curtain open while Karen stepped out of the confined space. "I've heard about you appearing before Gary and Jessica in the past, but why are you doing so in front of me now?"

"Because there is a wonderful woman in your kitchen right now who is completely enamored with you, and you're stuck in here wondering why in the world did she kiss you."

"Can you blame me, Karen? I thought Maggie was someone who is feeling vulnerable right now because her Christmas was stolen from her. I know she's looking for comfort, but I'm not sure if I'm the right guy to be providing that."

"Are you sure about that? Because she seems to think you fit the bill. Or, are you still hung up about the number Amy did on your head and heart last year?"

Phil was taken aback from the specter's bluntness. He knew from my reports she was the outspoken type, but this was the first time he had experienced it up close and personal. Now that he was able to see and hear her, he noticed my former fiancée was the type of woman who pulled no punches. She forced the writer to look within himself, and get in touch with his psyche.
Posted by Douglas J. McLeod at 7:44 PM No comments:

The time has come
For most people to be in bed
Dreaming various worlds
As they drift off to sleep.

Alas, this is the hour
When a writer’s creativity
Decides to come out to play
Filling their head with an army of plot bunnies.

The creator of these ideas
Needs to get them down on paper
As soon as possible
Otherwise, they would be lost forever.

Countless amounts of caffeine
Will be consumed by the scribe
In a bid to strike
While the iron is hot.


The next big plot twist.
Posted by Douglas J. McLeod at 7:40 PM No comments:

Catching up and a Cover Reveal

I know it's been ages since I've posted on here, but there has been a good reason for that. On July 5th, I started a new steady job as an Administrative Clerk at one of the colleges at the local university in my part of Florida. Although, the job is part-time  (20 hours per week), it takes a while to get accustomed to the new surroundings and responsibilities. However, it keeps me occupied, and provides a steady income because book sales tend to, paraphrasing a quote from Due South, "come, and go; never a word of warning."

That being said, I haven't been completely silent on the book front. Recently, I've finished work on the fourth Gary Celdom book, Kawartha Christmas Caper, and am in the process of putting the e-book version on pre-order. I'm still planning on releasing it on Sunday, November 20, 2016, the same day as the Toronto Santa Claus Parade (because I firmly believe the holiday season doesn't officially start until said parade takes place). I know this is cruel of me to make my fans wait that long, but I hope they feel it's worth the wait. (Although, having to wait 2+ years for a new story with Gary, Jessica, Karen, and Phil is cruel as it is, but I digress.)  Anyway, with the pre-order opportunities popping up, people will get a chance to see the cover for it. But, instead of initially going to Amazon (which, the Kindle version won't be listed for another week -- darn 3-month/90-day maximum pre-order window), Kobo, iBooks, or Barnes & Noble (those 3 sites have it available to order now), you can take a gander at it below. 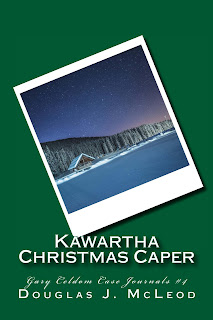 Alas, because of the new job, my July attempt at Camp NaNoWriMo fell well short, writing only 6,000 words in the first 4 days of the month. However, when things settle down, I will do my best to plug away at it... or that romance sequel that's been sitting in my work-in-progress pile for 2 years. Regardless, I have a couple writing endeavors in the queue, with other story ideas percolating in my brain (which is usually not good for the WIP Pile), so hopefully, I can focus on whatever project I decide to work on. Mind you, with November looming, I've yet to decide if I want to work on one of those WIPs, or an entirely new one for NaNoWriMo. But, I have a couple months yet to come to that determination.

Until then, if you have a Kobo, iTouch/iPad, Nook, (and soon, Kindle), make sure to pre-order your copy of Kawartha Christmas Caper. As an added offer, while it's available on pre-order, e-book copies will sell for 99 cents U.S. Come late November, it will go to its normal price of $1.99 U.S. (which I think is reasonable for a 30,000-word novella, but that's just me.)

"In the meantime, and in between time..." I hope to post another entry closer to the KCC release date.
Posted by Douglas J. McLeod at 8:46 PM No comments: