The Next, Sunny Chapter

Wow, what a month this has been.

Most people use the Christmas/New Year holidays to unwind, celebrate, and spend time with family and loved ones. While the last two on the aforementioned list was true, unwinding was not on the agenda during the past month, Then again, when you're packing up your belongings and moving to another country, any opportunity to relax does not occur until after you have fully settled in your new surroundings. Now, on the 11th day of the year 2016, I have the chance to sit and write a blog post about my experience.

The first, and daunting task was packing up my wares, and having them picked up by the movers (or shippers, in my instance) for future delivery. They came by on the morning of December 17th, and did not deliver my wares at my new abode until January 8th. Personally, I would have preferred if they had delivered them earlier, but due to US immigration policies, they couldn't ship until after I had arrived at my new home. A slight inconvenience, but at least, my wares have arrived. (Mind you, some of them are currently in quarantine, for reasons that don't need explaining.)

In the middle of this was the release of my latest book, A Bolt of Loving. It's a book about two people in recovery finding love with one another: he is a journalist who is a compulsive gambler, and she is a jazz musician battling an alcohol addiction. The book was originally slated for a January 5th release. However, due to a miscalculation on my part, it was made available a good week earlier. The book is available for Kindle, Kobo, and off of Amazon in paperback. I'm currently in the works of getting it, and most of my other books on Nook, but that might not happen until closer to February (U.S. taxation legalities, et al.) 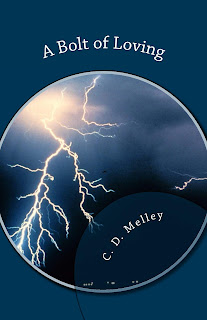 Finally, there was the actual flight to my new home back on December 30th. While I was not a fan of the fact I had to be at the airport in the wee hours of the morning to catch my 6:30 a.m. flight, the payoff was worth it in the end. What payoff is that? A week after my arrival, on Wednesday, January 6, 2016, yours truly said goodbye to his life as a bachelor for the past 44 years, 5 months, and 2 days, and became a married man. My wife and I spent the next few days enjoying our marital bliss with our pet Pomeranian. Alas, today we had to return to our normal lives: my wife returned to her job, while I'm maintaining the home until I'm eligible to work Stateside. Hopefully, that will change in the next few weeks, but until then, I'm keeping an eye on our "daughter."

So concludes my first blog post from the sunny South. I feel bad for my former comrades back in Canada who are enduring snow, wind, and bitter cold; such as the case for Canadians in winter. However, choosing between that, and sunny skies with cool temps in the sub-50 Fahrenheit range, I'll take the latter any day.
Posted by Douglas J. McLeod at 11:17 AM No comments: