Loyal readers of this blog will remember me plugging my good friend, Allison Cosgrove's debut novel, Sacrifice of Innocence, a police procedural about Detective Stan Brookshire taking on a mysterious cult. Well, Detective Brookshire is back with a new case on his desk in Dragon Twins. Tell us all about it, Allison.

"Separated at birth...reunited by murder.

"Behind the gates of an exclusive Lake City neighborhood, prominent businessman Don Chu’s housekeeper has been brutally murdered and his teenage daughter taken. The high-profile case has the Mayor himself sending the case across Detective Stan Brookshire’s desk. He barely has time to digest the details of the two sinister crimes before he’s called to yet another disturbing scene.

"This time, at the other end of the city, another murder and attempted kidnapping ring out with a similarity too convenient for coincidence. As the clues fall into place and the evidence mounts, Stan starts to see a pattern emerge. A DNA match, and the two cases now become one. With the help of an unexpected young ally, Stan begins his search for a victim that may still be alive. It’s a race against the clock and across the globe that will test his skills to the absolute limit. Two murders. Two kidnappings. Twice the danger."

Sounds intriguing. Do you have an excerpt to share with us?

A loud noise startled Jade from her slight doze. As she straightened up in her chair, she glanced at the clock on her bedside table across the room that held her textbooks. Eleven thirty-five.

Leaning back at her desk, she reached over and felt the bowl of soup Wei-Lee, the family housekeeper, had brought. It had been piping hot but now it was tepid. She estimated she was out less than half an hour.

Another crash came from the direction of the kitchen. What on earth was Wei-Lee doing at this time of night to make that much noise?

Jade started to get up when the door to her room flew open and two almost identical Asian men burst into her room. Grabbing her before she could make a sound, her feet lashed out and knocked the books to the floor as they dragged her toward the door.

"You're coming with us," one of the men said in a thick, Chinese accent. "You can either come quietly or we'll drag you out."

“There’s no way I'm letting you take me anywhere!” she yelled, struggling against them. Their grip loosened and this time she racked her nails across one man’s cheek. Crying out in pain, he released her arm to protect his face.

She ran out of the bedroom and down the stairs hoping to find Wei-Lee or something to defend herself. Jade heard them running after her. Chancing a glance over her shoulder, she saw they were right behind her as she raced through the house trying to get to the kitchen.

She was almost there when a man stepped out of the doorway, into her path. He was Asian but what caught her attention was the knife in his hand. Red liquid dripped from it onto the tile floor. She managed to duck around him and into the kitchen where she was halted at the sight of Wei-Lee. She lay dead in a slowly spreading pool of blood.

A hand grabbed her shoulder and tried to spin her around. Her reflexes drove her forward, jumping over the housekeeper’s body she dove for the cordless phone to dial 911. She managed to dial two digits before the phone was knocked out of her hand and it went flying across the floor.

Rough hands grabbed her and tore her clothing as she tried to get away. It was useless. They were too strong. It was too much for her. The sight of the dead housekeeper, the men in her house...the blood. There was so much blood.

A hand reached up and put a cloth over her mouth, she fought against it but it was no use. She had no strength left. As her world faded to darkness the last thing she heard was, "Do not hurt her. Ling will not be happy if she is harmed."

Wow! Sounds like Detective Brookshire has his work cut out for him this time. Where can we pick up a copy of Dragon Twins?

It's available through Amazon for your Kindle at: http://www.amazon.com/dp/B00DPEWFO2/

Thank you for sharing, Allison. Personally, I've read Sacrifice of Innocence, and I absolutely loved it. I currently have Dragon Twins on the Kindle app on my smartphone, and what I've read of it so far is just as compelling. So, if you like a good mystery, pick up your copy of Dragon Twins today.
Posted by Douglas J. McLeod at 11:45 PM No comments:

Words Against Cancer Auction is OPEN

Just a quick post to announce that the inaugural Words Against Cancer Auction to support the Canadian Cancer Society is now open, and will be until this coming Sunday night, April 13th.

As previously stated, I will be doing my best to update the leading bid on a daily basis. However, I should clarify that the aforementioned leading bid will be listed in Canadian funds. Should you state you'd like to bid in a foreign currency, it will be converted into Canadian funds at a comparable exchange rate and checked against the current leading figure to see if it will be overtaken. (However, it'd be easier to submit your bid as if you were bidding in Canadian funds.)

Just a reminder, if you'd like to place a bid on the auction item: a personally autographed, paperback copy of "The Prairie Fire Within", shipped to you, just write an email to wordsagainstcancer@gmail.com stating your bid, and write the Auction ID: A001 in the Subject line.

Best of luck in the auction, everyone.
Posted by Douglas J. McLeod at 12:28 AM No comments:

Email ThisBlogThis!Share to TwitterShare to FacebookShare to Pinterest
Labels: C.D. Melley, The Prairie Fire Within, Words Against Cancer

Greetings, readers. I write this entry today because I have an important, and personal announcement to make.

When I created my romance persona, C. D. Melley, I did it in honour of this woman... This is a photo of my late Great Aunt Pat, who succumbed to Stage-IV lung cancer on June 8, 2013. At the time of her passing, I was in the process of planning my first romance novel; which eventually became The Prairie Fire Within. I had previously written the first two books in the Gary Celdom detective series under my real name; however, I wanted to use a pen name for my romance genre books. And as I was sitting by her bedside, wiping away my tears, and knowing her time on Earth was almost done, the name came to me: "C. D.", for a seldom used middle name of mine, Charles, and my actual first name, Douglas, and "Melley" as my Great Aunt Pat's maiden name.

Which brings me to my announcement...

This Monday would've been my Great Aunt Pat's 84th birthday, and I wanted to do something charitable to help honour her memory. So, I'm setting up a (very) small charity auction, I'm calling Words Against Cancer, to help raise funds for the Canadian Cancer Society. How small? Well, let's just say, there's only one item for it, but I'm hoping to expand it in the future to include more items by talented independent authors. So, without further adieu, here is the one item that I will be auctioning off for the inaugural WAC auction... 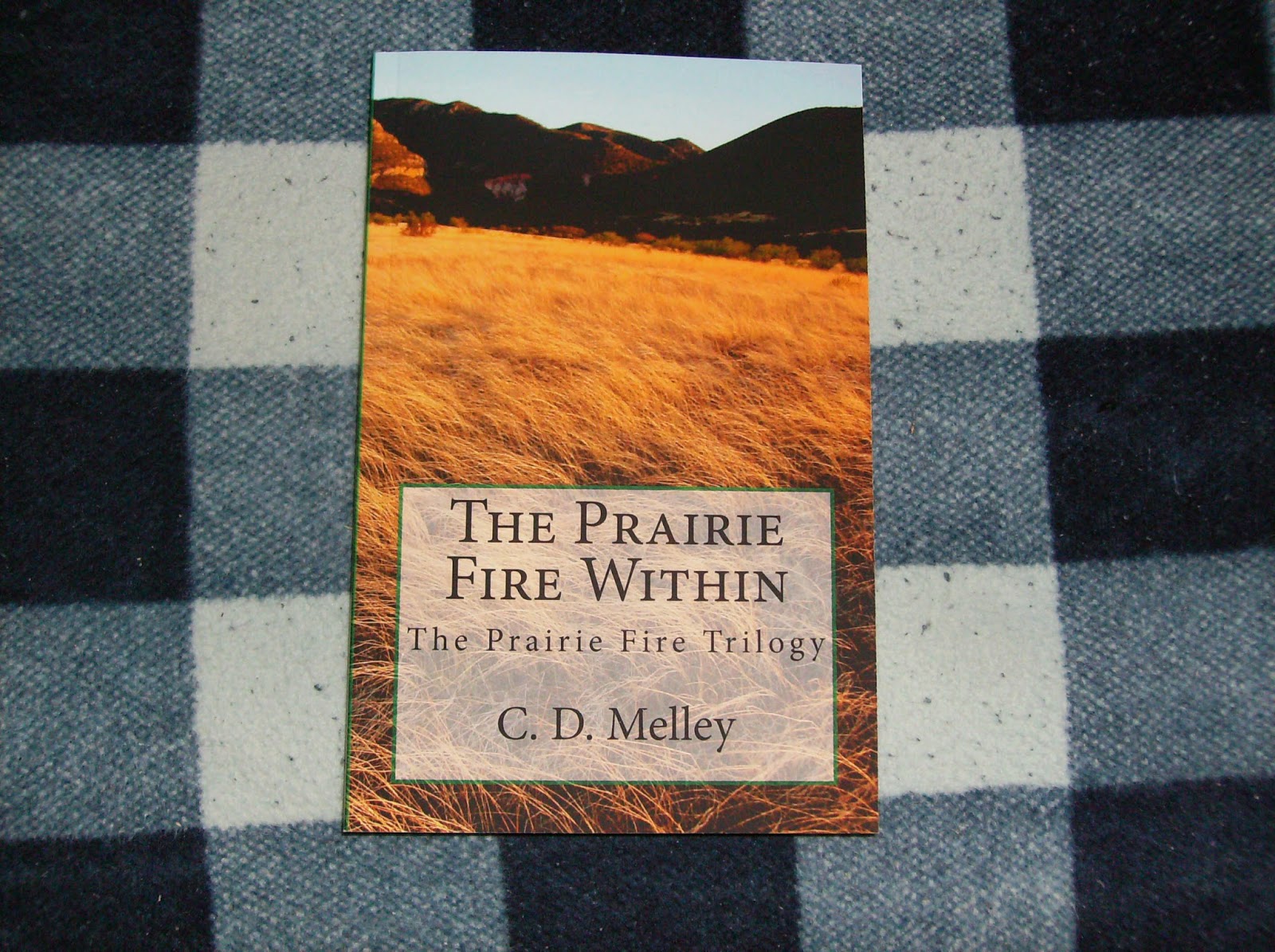 That's right, I'm auctioning off a copy of my debut romance novel, The Prairie Fire Within. But, not only that, I will personally autograph the book, and ship it to you. Since I'm donating this personalized, autographed copy, I can guarantee that 100% of the winning bid will be donated to the Canadian Cancer Society.

So, you're wondering, "C.D. (or Douglas.. I can go by either), how can I bid on this?" That's a good question, and deserves a good answer. So, here's how we're going to do it: we're going to do a "blind bid" auction. If you're interested in placing a bid, just e-mail your bid to: wordsagainstcancer@gmail.com with the auction item code: A001 in the Subject line. I will do my best to update the leading bid on a daily basis on my Facebook page: http://www.facebook.com/AuthorCDMelley, my Twitter account: @CDMelley, and right here at CeldoMelley.com.  The auction will start at 12:01 am, Canadian Eastern Time, this Monday, April 7, 2014 and will run until 11:59 pm, Canadian Eastern Time, Sunday, April 13, 2014.

On behalf of myself, and my Great Aunt Pat, I want to say thank you for your support, and good luck in the auction.
Posted by Douglas J. McLeod at 12:44 AM No comments: