This is the Hallowe'en-themed short story I wrote back in June, and has been printed on napkins and released in coffee shops in Brisbane, Australia, Leeds, England, and my hometown of Toronto, Canada. A huge thank you ever so kindly to the good people at Tiny Owl Workshop for making all of this possible for not only myself, but the other winning participants.

The afterlife is not all that it's cracked up to be. Yes, All Hallows' Eve is a time of year for my cohorts within the Nether Realm to rejoice over their high holiday. They howl under the light of the harvest moon, inspiring the nightmares of young children more concerned with how much candy they will receive during a night of trick-or-treating; their parents warning about moderation to avoid the impending rush and inevitable cavities from overconsumption of the sugary haul. But, I enjoy the autumn winds. Hearing the other ghosts carry on in their revelry grates on what's left of my soul, and takes away from my enjoyment in the season.

I was never a "party person". I spent my living days keeping to myself, my nose in a book, believing an educated mind was an enlightened mind. Hemingway, Shakespeare, F. Scott Fitzgerald, J.K. Rowling; all of them aroused my intellect in the name of literary entertainment. Little did I realize the last book I was engrossed in would be the one which lead to my unfortunate demise.

Let this be a lesson to the bookworms amongst the living. The next time you bury your nose in your e-reader, watch where you step off the streetcar. You can never tell when a lead-footed motorist is a barreling down the street, trying to beat a red light. It was a mistake I have been paying for to this day.

Now, I suffer every October 31st for my lack of attention. I should take pride, for this night, is now my New Year's Eve, but I'd rather read some Edgar Allan Poe instead of dancing like a zombie to Thriller. Regardless, I wish everyone living or dead a Happy Halloween.
Posted by Douglas J. McLeod at 9:30 PM No comments:

Salutations, blog readers. I hope everyone is doing alright. I'm still feeling the effects of the bountiful harvest yesterday since it's Thanksgiving weekend here in Canada. (Yes, I still have my stuffing addiction, but I've since added to it. Let me just say, I love butternut squash gnocchi.)

My apologies yet again for not posting a new blog entry in a month. (Not that my girlfriend was complaining, but she agreed, a new entry was long overdue.) Three weeks ago I started a new job. I'm now employed as a courier; making deliveries across Toronto via public transit. It's a good way to keep me out of trouble (at least when I'm not on the webcam with the aforementioned girlfriend), allows me the opportunity to see the city, and it gives me a little extra coin to spend and save. I've been mulling some of my delivery adventures over, and I've been thinking it might make some good material for an upcoming non-fiction book. I might gear it towards the humour genre, but we'll see what I can come up with over the upcoming weeks on the job.

This is one of the things that has been poking at my brain recently, as it's getting near that "favourite time of year" again. No, not Christmas (dear God, I haven't even begun to think about shopping for it), but National Novel Writing Month (or NaNoWriMo, for short). This will be my fifth foray into the month of November delve into literary fracas; where I will attempt to pen a 50,000-word first draft within 30 days. In 2011, I wrote the first draft to Scarlet Siege, and last year, the first draft to Rouge Numbered Week. This year, I'm planning on writing the next installment of Gary and the gang. It will be a reworking of my original 2010 attempt: a murder spree during NaNoWriMo itself. The tentative title I have for this piece is Writer's Revenge. I just hope I have better luck this time around than I did three years ago when I was only able to pen 8,000 of the necessary 50,000 before personal health issues came to the forefront. "But that's not important right now."

The other big thing that's been going on in my life is a little something I did this past June. For loyal readers to this blog (and I thank you for still sticking around in my periods of non-posting), I had submitted a short story to a publishing house in Australia. The requirements were it had to be no longer than 300 words, and it had to be Hallowe'en-themed. I quickly whipped up my story and sent it in. To my surprise, it was one of the 30 stories selected to be in this campaign. Then, I didn't think much about it for weeks until recently. I was asked to do a little fine-tuning to the story, which I did. So, here it is, Thanksgiving morn, I roll out of bed and turn my cell phone on to check my messages. Imagine my surprise when my phone buzzed with a tweet from the good people (Well, more like a wonderful woman, but I'm sure others are involved.) at Tiny Owl Workshop which included this photo. 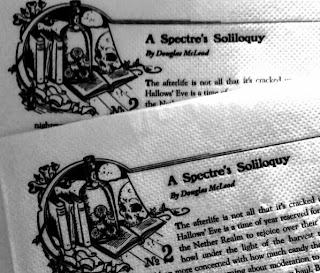 If that's not something to be thankful for, I don't know what is. The stories are slated for release in time for "All Hallow's Read", which I presume will be within the next fortnight, at select coffee shops not only here in Toronto, but in Leeds, England, and Brisbane, Australia, as well. For a complete list of venues, you can find them at: http://tinyowlworkshop.com/2013/08/13/some-of-the-fabulous-places-to-go-to-find-halloween-napkin-stories/  To say I'm not uber-excited would be a complete lie.

That's all for now from this end. To all of my fellow Canadians, I hope you have a wonderful Thanksgiving, and don't overdue it on the fixings. Turkey and stuffing will have that full and sleepy effect on you. Talk to you all again when I can.
Posted by Douglas J. McLeod at 12:16 PM No comments: