Another week has come and gone, and I've been busy toiling away at my desk and in various libraries across the city. Not much has gone on with the editing and reading front, so I will hand this off to my romance novelist alter ego, C. D. Melley.

Thank you, Douglas. Work on "The Prairie Fire Within" has been coming along quite nicely over the past week. As of Sunday afternoon, I have written over 23,300 words for the story. I'm hoping to have the first draft of 50,000+ words complete by the end of the month. In the meantime, in advance of the book's eventual completion, I have taken the opportunity to create my own author/fan page on Facebook. On it, I have included a brief synopsis of what my book is about.

For those interested, you can check it out by clicking here.  Back to you, Douglas.

Thank you kindly, C. D. I can't wait to read the finished project.

If you've been following me on here, you know I've been in the process of re-editing my first novel, Scarlet Siege, for eventual re-release. A couple weeks ago, I posted an event on my author/fan page where I would be revealing the new cover for the title when it makes it way back onto online marketplaces. Today is that day.

So, if you haven't tuned into my Facebook pages as of yet, here is what the new cover looks like... 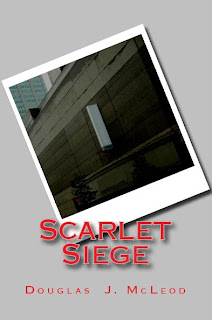 For those not familiar with the story, allow me to give a description...


Gary Celdom is a 51-year old detective who has been with the Toronto P.D. for over 25 years. There are a few little quirks about him, though. He doesn't always follow things from the book, and he also suffers from emotional and psychological trauma because he is often visited by the ghost of his fiancée, Karen Prairie. She was assassinated on their wedding day 20 years prior, and still comes around to give him grief and advice. Also by Gary's side is his current "professional partner," Jessica Amerson, who has been experiencing some mixed emotions about her colleague.

In Scarlet Siege, Gary has decided to take some time off to attend a fan convention in town for his favourite television series. While there, he runs into an old friend, Phil Bennett, and they set out to enjoy the weekend's events together. Unfortunately, things go awry when it is learned one of the main actors has decided not to attend the festivities; a development that angers a group of fans. They decide to revolt, and the entire convention becomes a hostage situation, with the rebellious faction demanding the aforementioned actor make an appearance, or they will start killing off the attendees.

The story is the conflict Gary experiences since he's been injected into the situation as an undercover officer. We learn of the dynamics of Gary's character; as well as, the relationship difficulties experienced by not only Detective Celdom, but of his friend's inside the convention, and Jessica who is back at the Division, receiving text updates from Gary on the situation.

I'm hoping to have "Siege" available for re-release within the next month or so. In the meantime, don't forget to check out my author/fan page on Facebook for all the latest in the Gary Celdom news, and check out C. D. Melley's author/fan page on there for updates on "Prairie Fire". We'll see you again next weekend. Hasta!
Posted by Douglas J. McLeod at 12:00 PM No comments:

Flash Non-Fiction: This Is Writing!

When one embarks on the journey to become what they are destined to be, they must overcome a rash of obstacles that life or others put in their way. They will come across a slew of critics and naysayers who believe the path they take should be done a certain way, or proper channels need to be followed. They will pay some heed to the advice; others will be brave enough to forge their own path into the unknown. The latter group will suffer setbacks and failures along the way, but it is all part of the learning process. Being a writer is no different from this.

When we first start out, we get the idea that the task ahead is unfathomable; yet, we have a passion and a desire for our voices to be heard. Yes, we will have our aforementioned critics; people who will tell us that we are crazy and we should find a “real profession,” but we don’t give up. Every rejection letter we receive, every naysayer who tells us our stories are not good enough drives us to prove those people wrong. However, with every ‘Negative Nelly’ we find a ‘Supportive Sally.’

As we continue to hone our craft, we gain the support and admiration of others; people who follow us on our request. They read every word we write, and in the case of some, offer suggestions to make what we put down on paper better; thus, making us better writers in the process. It is a long road we travel, but when you receive confirmation of your first sale, it is the validation we strive for to say we have finally arrived.

When that day arrives, we can finally stand tall, and proclaim, “I AM A WRITER!”
Posted by Douglas J. McLeod at 11:45 PM No comments:

Howdy everyone. I hope you all had a great long weekend... well, it was a long weekend if you were a resident of the U.S. of A. While I had mine the week before, I was spending the past few days visiting my relatives 75 miles (or 120 kilometres, for the metric followers) away. Here's what's been going on as of late:

The Write Stuff: As most people know, I am currently in the midst of the July edition of Camp NaNoWriMo. While it has been tough to get the ambition to write some days due to the heat, I have trudged on. At the time of writing this update I have scribed 12,243 words of the necessary 50,000, or 24.486% complete if you're interested in percentiles. My story is in the seventh chapter and the scene has my MC out on a coffee date with her hunky love interest. I don't want to give too much away, so you're going to have to wait until its released... whenever that may be.

Every Day I'm Editing: Speaking about releases, we are currently one week away from the reveal for the spanking new cover for my first novel, Scarlet Siege. Which brings me to some... well, I'm not sure if one would call it unfortunate news... on the editing front. I've heard back from one of my beta readers, and she's made some suggestions for my manuscript. Like my still M.I.A. hired editor, the beta has suggested I need to tweak my sentence structure a bit. Admittedly, English was never my best subject in high school. I liked to write, but my form was not the most polished. This means I will resume re-editing "Siege" (when I get a free moment from writing my current project; squeezed in among the two suggested meditation sessions a day my teacher for a class I'm currently taking on Thursday nights recommended. Oy!) Needless to say, I'm going to be busy for the next while.

Reading is Fun-damental: Alas, with everything going on, my reading has been put on hiatus. It is a shame because I have a few books on my "To Be Read" list I want to tackle. Sometimes, there's not enough hours in the day, and coffee can only prolong you for so long before the system crashes.

That's all for this week's belated edition of The Division Report. I'll return in a few days with the latest progress report on The Prairie Fire Within. Try to stay cool, everyone.
Posted by Douglas J. McLeod at 3:46 PM No comments: