A Funny Thing Happened On The Way To Editing

As I said in my last posting, a new year brings a new beginning. The only thing was, I didn't really intend on doing this initially; yet, it was a move where, after careful evaluation, will result in a better product overall.

While the support for my debut novel, Scarlet Siege, has been wonderful, there have been a few people with one general criticism for it: the font. I'll admit, when I first published it back in July 2012, I had no idea of the proper publishing form regarding standard typeface or formatting the margins accordingly to make it look like a professional product. However, in the six months since, I have learned a reasonable amount more. Because of this, I decided to reformat the book.

Don't worry, the story is still the same. Gary still goes to the fan convention that gets turned into a hostage situation. Jessica still debates about her feelings for her partner. And, Karen still provides the same sage advice. However, instead of the book being printed in the slightly confusing Calibri font, it's now in the more cleaner, and professional Times New Roman. What's more, the cover has been slightly retooled to reflect the change. 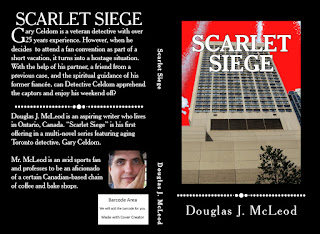 The Second Edition of Scarlet Siege will be exclusive to Amazon; with the Kindle version being released on Tuesday, January 8th, and the Paperback variant made available on or around Monday, January 14th.

Now, some other slight modification news that might upset a few readers. To help bring my pricing strategies in tune with the new edition of "Siege," I have minutely raised the price of my second novel, Barbadian Backlash. My second novel in the Paperback format will now cost $7.69 US -- a mere 70 cent increase, and the ebook format for Kindle and Kobo purchasers will rise 40 cents to $2.89 US/CDN. It's not much, and compared to the price increases one sees when it comes to published material, both of my novels are still reasonably priced compared to others in the same genre. I thank you for your understanding and support during these changes.

With the formalities out of the way, rest assured, I will return to my toiling on Gary's third Case Journal, Rouge Numbered Week. Stay tuned, as a fortnight from now, I will be posting the premiere chapter of this upcoming novel.