My apologies for not posting anything for a little while; I've been rather busy with a few things.  First, I'm gradually increasing the availability of Scarlet Siege for various e-Readers. After much waiting, my debut novel will be released on Kobobooks.com this coming Saturday, September 29th. However, realizing I needed to branch out further than that, I have signed up with Smashwords to widen the book's reach. As of current writing, Scarlet Siege is not only available on the Smashwords site, but has shown up on Diesel e-Books, and for Apple's iBooks service. I was hoping it would appear on Barnes & Noble's Nook service by now; however, there has been a delay in that respect; however, it should be made available soon. It should be noted, there is a listing for the paperback version on the B&N site, but it is through a secondary retailer who is charging twice as much as if you would be able to purchase it directly via Amazon. I don't know about you all, but to me $7.99, plus shipping is a lot more economical than playing $16.87, plus the cost of having it mailed. However, this is not the only news that I have with this posting.

As you may know, I have been working on the revisions for my second novel, Barbadian Backlash, over the past few weeks. Well, I am pleased to announce that the edits have now been completed, and the cover has been designed. I would like to take this time to thank my dear friends, Marissa Moses for supplying me with the cover photo, and Jen Geffros for helping me edit Marissa's snapshot to get the hue just right. Lately, I've been immediately posting updates on Facebook, and I know that has given this blog great injustice. However, I'm making amends right now. For it's public Internet debut, I would like to reveal the cover for my second adventure with Gary, Jessica, and Karen for you all, right here on Gary Celdom.com ... 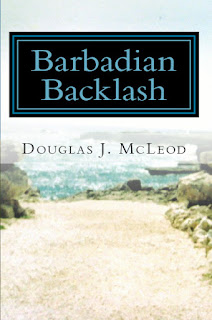 Now, the question is: when will you, the loyal supporter and reader, be able to obtain your copy of my latest tome? Well, I'm trying to guesstimate the timing, but I am shooting for a release date of Tuesday, October 30th. And instead of it popping up on various websites on a staggered date, I will do my best that this will be the date it will be made available on Amazon's Kindle service, Kobobooks.com, and Smashwords. I'm hoping the paperback version will be released on this date as well.

Thank you all for your continued support, and stay tuned. This November, I commence work on the third episode of the Gary Celdom Case Journals series. I shouldn't give any spoilers, but it involves a murder during the festivities for the 100th edition of the Canadian professional football championship. Until next time, happy reading.

Short: High Has Sunk So Low

There have been a lot of things I've seen during my 27-year career. I've witnessed grizzly deaths, I've experienced both triumph and heartbreak; none more vivid than when Karen was taken away from me on what was supposed to be my wedding day. However, I could never imagine what I witnessed the other day.

Jessica and I happened to be making our way to The Beach for a nice little dinner out; something to help us unwind after solving another case together. As we were driving along Queen St. East, towards Woodbine Avenue, we noticed a commotion out by the Greenwood Tele-theatre. It's situated on the site of the old Greenwood horse racing track, but they've turned part of the old Grandstand into a little horse betting parlour where one could wager on various simulcast thoroughbred and harness races from around the continent. I was going to drive on past it; thinking it was a matter that would be handled by the officers at the nearby 55 Division, but something in the back of my head told me to rubberneck and see what it was all about. Looking back, I probably should have ignored it altogether.

Apparently, one of the patrons had gotten unruly to the point where he was escorted out of the facility and was being threatened with trespassing charges. Detective Emerson thought such a complaint was excessive, but we would later find out that the offender had previously self-excluded himself from all Ontario Lottery and Gaming venues, and for some reason, he felt compelled to try his luck at playing the ponies; thinking such an edict only applied to casino and slot facilities across the province. The ejected patron was noticeably agitated and was shouting obscenities at the security guards. Fearing the situation would get out of hand, I pulled over, and both Jessica and I decided to interject ourselves in a bid to defuse the situation. I asked the unruly individual to calm himself down, and as he turned to me; that was when my heart had sank. I knew the person who was creating all the fuss. It was my old writing companion, Highlander.

Both my girlfriend/partner and I would accompany him to the nearby police Division, and as much as we apologised for stepping on the booking officers' toes, we took him into one of the Interrogation Rooms to find out what the hell was going on with him. It was then that my illusion of the budding writer had shattered. While he was still struggling to get an initial work published, he confessed to both Jessica and myself that he was a problem gambler who had been seeking counselling for his addiction; even going as far as self-excluding himself from all casino and slot facilities last April; however, about a month ago, his one-on-one counsellor explained that such an edict only applied to those certain facilities, and not lottery kiosks. Upon the knowledge of this "exemption", he had fallen back hard onto playing the daily lotteries. It was only today he attempted to see if it applied to the Tele-theatre near The Beach, since he knew Woodbine was off-limits to him. It was a gamble that didn't pay off. Then again, gambling in general rarely does and one usually ends up losing more often than winning.

After all was said and done, Highlander was let off with a Warning: if he were to ever show his face down at the Queen East facility, he would be formally charged. Jessica and I drove him back to his place, and left a message with his one-on-one addictions' counsellor to inform him of this lapse. It's a shame that my friend had hit a tailspin. Before he recently slipped he had been clean for 5-1/2 months. I don't know if he can successfully get back on the wagon, but considering he stuck his neck out for me during the hostage siege last month, I sincerely hope that he does.
Posted by Douglas J. McLeod at 3:18 PM No comments: